I am writing this post after pushing the following commits:

In this commit, I have set up the first redimentary calls from the iOS app to my web service. The web service is written in node.js with a couchdb backend. I think I am going to make this one short, as the content here is more stuff that I am learning that it is stuff that I plan to cover at devLink.

I added a lot of code I have been building up over time. I added some categories that I find helpful. I also added some stuff to manage asynchronous NSURLConnection calls. I parse the json to NSDictionarys and NSArrays using this code by Stig Brautaset.

I wrote some unit tests to validate the communication between the iOS app and the service. I was able to sort-of sleep the main thread for the tests for an arbitrary amount of time while it waits for the web call to return. It works, but it feels klunky. At any rate, these are probably more integration tests than real unit tests. Whatevs, I am not too concerned. It gets the job done.

I created a README.md file, you can see that in the github branch here. That has links to the things you will need to install (node.js, npm, and couchbase). It also has some example documents that refer to the Candy Store products for sale from the App Store.

In iTunes Connect, I created the IAP items that will be used by Candy Store. Though it was a rather tedious effort of entering data in web forms, it was not very difficult. The best resource to guide you through the process is the iTunes Connect Developer Guide. There is also an excellent video from this year’s WWDC on In-App Purchases. Pretty much, these two things are helping me fumble through my app. Both of these resources require you to be registered in the Apple Developer Program. 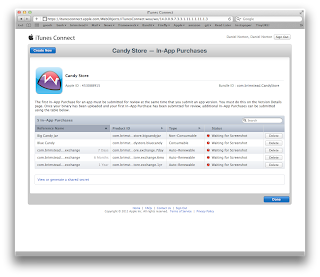 I was suggested this website by my cousin. I am not sure whether this post is written by him as nobody else know such detailed about my trouble. You are wonderful! Thanks!Nice blog here! Also your web site loads up fast! What web host are you using? Can I get your affiliate link to your host? I wish my website loaded up as quickly as yours lol iphone psd

When I originally commented I clicked the “Notify me when new comments are added” checkbox and now each time a comment is added I get four e-mails with the same comment. Is there any way you can remove people from that service? Many thanks! device mockup

I am really loving the theme/design of your web site. Do you ever run into any browser compatibility problems? A few of my blog readers have complained about my website not working correctly in Explorer but looks great in Chrome. Do you have any tips to help fix this issue? apple app store mockup

Loving the information on this web site , you have done great job on the posts . app screenshot

"We are a friendly bunch. We assure you that you will find our team professional and understanding. We are committed to providing you a great service, one that you will remember.
Website:https://www.alizasolutions.com/
Address:1st Floor Alperton House, London, UK, HA0 1EH.
Phone:0044 7449 186 664" logo services in usa

Thank you for such a fantastic blog. Where else could anyone get that kind of info written in such a perfect way? I have a presentation that I am presently working on, and I have been on the look out for such information imac mockup free

You created some excellent tips at this time there. I did searching around the topic and discovered most everyone will recognize in your web site. imac mockup png

Hi there, just became alert to your blog through Google, and found that it’s really informative. I am gonna watch out for brussels. I’ll be grateful if you continue this in future. Numerous people will be benefited from your writing. Cheers! imac mockup

You could certainly see your enthusiasm in the work you write. The world hopes for more passionate writers like you who aren’t afraid to say how they believe. Always go after your heart. imac mockup free

Excellent blog right here! Also your site a lot up very fast! What web host are you the use of? Can I am getting your associate link to your host? I want my site loaded up as quickly as yours lol desktop mockup

Nowhere on the Internet is there this much quality and clear information on this subject. How do I know? I know because I’ve searched this topic at length. Thank you. watch mockup

just couldn’t leave your web site before suggesting that I really loved the standard information a person provide for your visitors? Is gonna be again ceaselessly to check up on new posts apple watch mockup psd

Good job on this article! I really like how you presented your facts and how you made it interesting and easy to understand. Thank you. app development company

This information is magnificent. I understand and respect your clear-cut points. I am impressed with your writing style and how well you express your thoughts. mobile app developer

Thank you, I’ve just been searching for information about this topic for a while and yours is the greatest I’ve discovered till now. But, what in regards to the conclusion? Are you sure concerning the supply? top app developers

Dude.. My group is not considerably into looking at, but somehow I acquired to read several articles on your blog. Its fantastic how interesting it’s for me to visit you fairly often. website tips

Spot on with this write-up, I truly assume this website wants much more consideration. probably be again to read much more, thanks for that info. top web design agencies

Maximize your by how a large amount of gear are employed internationally and will often impart numerous memory using that your is also fighting that is a result from our team rrnside the twenty first centuries. daily deal livingsocial discount baltimore washington website design company

I am glad to be a visitor of this consummate web site! , appreciate it for this rare info ! . interface designer

I was recommended this blog by my cousin. I am not sure whether this post is written by him as nobody else know such detailed about my problem. You’re incredible! Thanks! ui/ux designer

Hey I know this is off topic but I was wondering if you knew of any widgets I could add to my blog that automatically tweet my newest twitter updates. I’ve been looking for a plug-in like this for quite some time and was hoping maybe you would have some experience with something like this. Please let me know if you run into anything. I truly enjoy reading your blog and I look forward to your new updates. ui ux design

Hmm it appears like your website ate my first comment (it was super long) so I guess I'll just sum it up what I had written and say, I'm thoroughly enjoying your blog. I as well am an aspiring blog blogger but I'm still new to everything. Do you have any points for novice blog writers? I'd certainly appreciate it. front end developer

You will study the worth of the traces, understand how bonuses are obtained, what scatter and wild symbols are. Little by 카지노사이트 little, you'll get familiarized with all the choices we described earlier on this slot overview. As time passes, you will begin changing into an more and more skilled player.